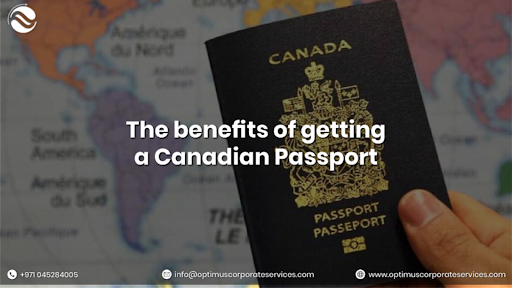 The Benefits of Getting a Canadian Passport

It is possible to travel to and from Canada freely if you have a valid passport. However, Canadian passports are exclusively available to Canadian citizens. A passport is not temporarily open to permanent residents or those in the country.  As a dual citizen, you are permitted by Canadian law to have more than one number of passports from any nation that permits such a thing.

The best Immigration consultants in Dubai at Optimus Coprorate Services can help you in all the immigration steps. Read the article thoroughly to know the benefits of Canadian citizenship and passport.

Get Canadian Citizenship to Enjoy the Passport Benefits

A Canadian citizen may only obtain a Canadian passport. Many people immigrate to Canada , but they are not eligible to enjoy the perks of Canadian citizens. Obtaining citizenship is a lengthy process, which requires you to follow the below-mentioned steps:

Three out of the last five years, or 1,095 days, must have been spent in Canada before you may apply for citizenship, irrespective of how you became a permanent resident. Therefore, the minimum time required to become a Canadian citizen is three years.

Apply for Canadian Passport After Getting Canadian Citizenship

You won’t be able to apply for benefits until after the citizenship ceremony and receipt of your certificate. Everyone in Canada is welcome here, and rejection is a slight possibility. Only if your citizenship is canceled for reasons relating to safety, social or international rights violation or organized crime may you lose it.

Obtaining a Canadian passport is easy,  and you should complete the required paperwork. Include an original copy of your citizenship certificate since it is one of the most crucial papers. Submission of a birth certificate is needed even for those who were born in Canada.

All of the following must be sent with your documents:

You may submit your paperwork for a Canadian passport either by mail or in person at a local passport agency.

How Much Time Does It Take to Process the Passport Application?

Passport applications and renewals from Canadian citizens are quite popular right now. This is because, in many parts of the world, limitations on travel caused by the pandemic are being lifted, making it feasible to go on vacation or visit relatives and friends overseas once more.

To keep track of how long it takes to process applications, the Canadian government has developed a tracking tool, which now states that it may take anywhere from two to thirteen weeks, not including the time it takes to apply. If you want to travel internationally in the near future, you should begin the application procedure as soon as possible.

Get Canadian Citizenship for Various Benefits

Citizens have a voice in the leadership of Canada’s federal, provincial, and local governments via voting in elections, running for office, and participating in other political activities. It might be a locality, municipality, school district, province, region, or nation. Individuals may run as members of one of the major political parties or as independents.

Only citizens can get the kind of top-secret clearance necessary for certain positions which include the Federal government. Such job opportunities in Canada often provide a competitive salary and a wide range of perks.

You can also read: Best Provinces in Canada for Job Opportunities

A Canadian passport is issued to Canadian citizens and requires less frequent renewal than a permanent residence card. The passport enables visa-free entry to many countries and expedites the visa application process in those countries that need them. This is just valid for traveling and does not authorize you to work. It is more probable that your return to Canada will go smoothly if you have a valid passport. If you are using a Canadian passport, you will also have the backing of Canadian embassies and consulates overseas.

If you’re a citizen of Canada and have children, they will be considered your Canadian legal dependents. No application procedure will be necessary for them. It is possible for certain children born outside of Canada to be automatically regarded as citizens of Canada since at least one parent is a registered or Canadian-born citizen.

What Benefits Can You Enjoy with a Canadian Passport?

Despite its reputation as a haven for newcomers, Canada continues to wow the world every year by welcoming a record number of foreign nationals. Canada’s openness to newcomers has contributed to its economic expansion, and its streamlined immigration system has made it a top destination for those looking to start a new life elsewhere. A sense of safety comes with becoming a Canadian citizen since it is not an easy status to renounce. A Canadian passport provides its holder with several advantages.

Some of the benefits of having a Canadian passport are listed below:

Regarding the quality of life and employment opportunities, Canada ranks number two worldwide. We all know this place ranks high on lists measuring sustainability, cultural impact, economic clout, entrepreneurial spirit, and, most importantly, quality of life. For this position, a top-secret clearance is not necessary. You are no longer restricted to working in your home province or territory after receiving permanent resident status in Canada, nor are you required to remain in the same area or occupation. Anytime you want, you may leave Canada and come back in.

Countries that accept dual citizens include Canada. If you are not required to renounce your citizenship, you may stay in your native country. However, whether or not you are required to make this decision is entirely country-specific. Having Canadian citizenship means you’re eligible for a variety of privileges both in Canada and your native country. In addition, you may visit many countries without a visa or get one upon arrival. The best Canadian Immigration consultants in Dubai  can guide you about all the legal requirements and criteria to enjoy the dual citizenship of Canada.

The Canadian passport is simpler to renew than the permanent residence card and has to be renewed much less often. If a visa is required, it is usually simple to get one, and the passport makes it possible to visit many nations without one. Anyone in possession of a valid Canadian passport is exempt from obtaining a visitor’s visa to enter the NAFTA-eligible jobs in the United States are open to nationals of both the United States and Canada.

A permanent resident card has a five-year expiration date. Permanent residents need these cards to travel internationally, and certain companies and government institutions may also want to see them. As a result, permanent residents are put in the terrible situation of having to reapply for a Permanent Resident Visa every five years and pay a new cost. A citizen has no equivalent duty. Citizenship certificates in Canada are good for life, and passports only need to be renewed every ten years if the holder plans to go abroad.

The expense of education accounts for the vast majority of all expenditures; nevertheless, the Canadian government guarantees that all children will get free public education up to and including grade 12 or until they reach the age of 18. There are three tiers of schooling available in Canada: elementary, secondary, and tertiary. Eventually, when it comes time to enroll in college, Canadian citizens and permanent residents pay lower tuition rates than international students. Furthermore, the government of Canada would pay for your medical treatment. Canadians pay for their universal health care system, including prescription medication coverage, via taxes.

In all federal, provincial, and municipal elections in Canada, residents have the right to vote via secret ballot. You only need to sign up to vote at your office for local elections or register online. There is a unique registry of qualified persons to vote in federal, provincial, or local elections, so your name could already be there. A citizen can run for office as a member of any significant political party or independent.

Many countries provide Canadian residents visa-free entry for specific reasons, making a Canadian passport more beneficial than one issued by the place of birth for many naturalized citizens. If your birth country also accepts dual nationality, you have the unique opportunity to have two passports (one from Canada and one from your country of birth). Suppose you have dual citizenship in a country that does not allow its residents to hold citizenship in another. In that case, you may wish to compare the validity of Canadian and home-country passports before planning any international trip.

So, contact  best Immigration consultants in Dubai  if you want to immigrate to Canada from Dubai, or want citizenship of Canada to enjoy various benefits.