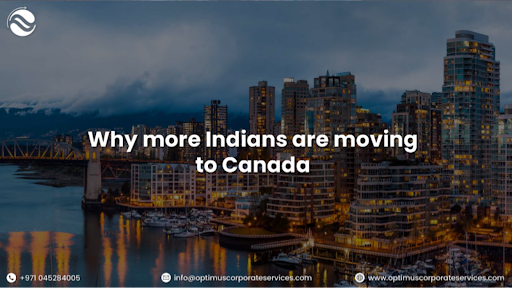 Why Are More Indians Moving to Canada?

Indians continue to get the most permanent residence and visas in Canada. At least one-third of the 405,303 new permanent residents in 2021 were Indians, according to information provided by Immigration, Refugees, and Citizenship Canada (IRCC). The information was released as Canada made progress in recovering from the labor shortage brought on by the coronavirus outbreak.

According to CIC news, , about half of the nearly 450,000 international students who immigrated to Canada in 2021 were from India. Because of programs like the Post-Graduation Work Permit, which allows students to remain in Canada after graduation, more Indian students are increasingly selecting Canadian institutions.

Students with a Post-Graduation Work Permit who enter Canada can hunt for employment and ultimately submit a PR application. Not only from India but also from the Indians living in Dubai who are applying for immigration to Canada need to take the services of the best Canadian immigration consultant in Dubai. It will allow them to make wise choices and make the process easy.

Why Do Migrants from India Choose Canada as Their Destination?

Numerous Indian individuals have immigrated to Canada since it is unquestionably one of the most beautiful nations in the world. Beautiful landscapes, an excellent healthcare system, and an education system so effective that Canada is ranked third in the world for its strength are all things that the maple leaf country has to offer. There are several reasons to adore Canada; however, some of the most significant attractions for Indian migrants to Canada are as follows.

Immigration and Diversity Are Welcomed in Canada

This is a fact that Canada officially adopted a policy to promote multiculturalism in the 1970s, under the leadership of Prime Minister Pierre Trudeau. Therefore, multiculturalism has since been a significant component of Canadian identity. Furthermore, natives recognize the social significance of immigration to Canada, which is evidence that Canada embraces multiculturalism. Above all, Canada’s “mosaic culture” is renowned for allowing all cultures to coexist.

The Standard of Living in Canada Is High

Canada holds the top spot for life quality. The number of individuals who wish to come to Canada and those who are already there is increasing as we go towards the coming years. Indians also follow suit, and a high standard of living is present in Canada. Who wouldn’t relocate to a nation with lower living expenses than those in the United States? Rent and health insurance premiums will be reduced.

Many wonder what gives Canada a “High” rating for life quality. Let’s see. To start, schooling is relatively reasonable in Canada, and surprise! They also top the list for educational excellence. Even though school is reasonably priced, Canada is ranked first in the world for education. Also, there are exotic holiday destinations where you may stare at mountains, go hiking, and create enduring memories.

Not only that, but the Canadian economy is booming like never before, which makes life prosperous for everyone. One of the safest places on earth is Canada. If you are living in Dubai and want to migrate to Canada, you need to consult OCS, the team of  best immigration consultant in Dubai for taking benefit from their services.

One of the Safest Nations in the World

You will be astounded to learn that Canada constantly ranks better for its safety and for being named first for quality of life. Canada is the second-safest nation in the world, according to Daily Hive,  a reliable source. Canada has one of the lowest crime rates in the world, which contributes to the country’s high standard of living.

The government of Canada and even the people of Canada have always maintained a friendly immigration policy, ensuring the absence of issues like racism. According to a Statista analysis, Canada is ranked second on the list of the safest nations for LGBT travelers. At the same time, India is not even safe for them. If you are an Indian and want to know the answer to the question, ‘how to immigrate to Canada?‘, you are required to visit any consultant that deals in Canadian immigration.

The Canadian economy has always been strong; the statistic Canada 2022 reported that Canada’s unemployment rate was only 4.2%, which is lower than the global average unemployment rate of 10.31%. Three major sectors are the reasons why the Canadian economy is thriving. The majority of occupations are in the service sector, which includes banking, communications, retail, tourism, government, and the fields of transportation, education, health care, construction, and retail.

Some of Canada’s natural resource-related businesses are forestry, fisheries, agriculture, mining, and energy. Canada is relatively wealthy in these natural resources and strengthens its economy by exporting them to countries that lack them. Manulife, Magna International, A&W, and several other well-known Canadian businesses are among them. Therefore, Indians prefer to migrate to Canada to grab so many job opportunities in Canada.

One of the Top Countries Best for Education Is Canada.

One of the main factors attracting Indian immigrants to Canada is education. In numerous surveys, Canada is rated as the top nation for education. The high degree of education provided in Canada is comparable to that offered in the US, UK, and Australia. Because of its high teaching quality, Canada attracts Indian students every year. In contrast to the United States, the UK, and other nations, Canada has a low cost of living. Therefore, a large number of people migrate to Canada from India.

Canada is also at the top of the list regarding research because they integrate contemporary research into the classroom. Also, educationists in Canada ensure that students are always prepared for any unexpected current workplace issues they may encounter. Canada is a welcoming country for immigrants because of its highly regulated policies and regulations.

The Job Market in Canada Is Growing

Canada’s strong economy and many large corporations mean that the job market benefits significantly from these factors. As a result, jobs keep pouring into Canada, which is one of the reasons why Indian immigrants are moving there at an increasing rate—the job market is welcoming them with open arms. If you are living in Dubai and want to enjoy the fruits of growing job markets in Canada, hurry up!

It should be noted that there are about 1 million job vacancies in Canada by year 2022, on which people are applying. No laws in Canada discriminate against immigrants from India and prohibit them from obtaining greater chances. You will experience an extraordinary level of job advancement in Canada. By securing excellent employment prospects that matched their experience and skill set, Indian immigrants achieved professional success in Canada.

Vacation locations in Canada are amazing

It’s a common question that why people from all over the world keep moving to Canada? The breathtaking holiday destinations this incredible country has to offer you are one of the benefits of coming to Canada. You have the chance to go to locations that have served as desktop wallpaper for as long as you can remember while you are here. A dream will come true if you go to Canada. Every year, a sizable number of people make the journey to Canada in search of a leisurely holiday.

Additionally, this is undoubtedly advantageous for you if you want to come to Canada. You no longer need to spend a fortune seeking adventure in another nation. Places like Banff, Niagara Falls, Jasper National Park, Prince Edward Island, and others are all accessible in Canada as an alternative. A lengthy trip to a location like Banff will leave you with a lifetime’s worth of priceless memories. The magnificent nature that you will encounter here is simply breathtaking. Therefore, Indians move to Canada every year in large numbers. Some Indians, who are already working in Dubai, rush to the Canadian immigration consultants in Dubai to migrate to Canada.

Canadian PR allows you to apply for public health insurance and eliminate most medical costs. Your tax dollars go toward supporting Canada’s universal healthcare system. You must provide your health card to get healthcare benefits at the hospital and clinic.

Moving to another nation is a significant decision, particularly concerning the ongoing worldwide pandemic that has left many families insolvent after paying exorbitant medical expenditures. Therefore, numerous job opportunities in Canada and a free healthcare system attract Indians to migrate to Canada.

Indians’ American Dream has been replaced by a wish to migrate to Canada from India. Indians, who are working in the best countries like Dubai, are migrating to Canada for the reasons above. Canada is the best destination for Indian students, business people, families, and entrepreneurs.

Previously, Indians preferred to immigrate to the United States; contemporarily, they prefer to move to Canada. Mainly due to two reasons; one, strict American immigration policies started in Trump’s era; two, Canadian welcoming immigration policies. Moreover, the country under discussion also portrays a bright future for immigrants with a large-scale potential for growth based on resources.

To immigrate to Canada without any complicated process, you can contact OCS for in-depth knowledge about immigration laws and regulations.